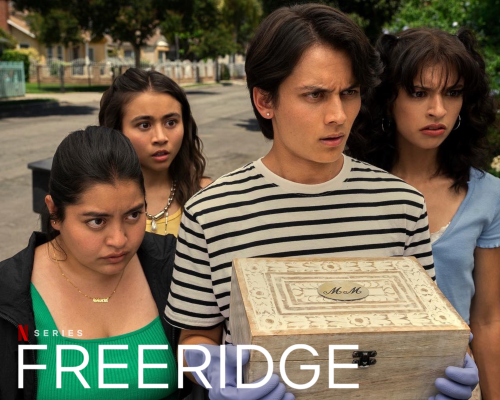 Freeridge, a new coming-of-age series, is coming on Netflix. It is an On My Block spinoff series, which centers on sibling rivals Gloria and Ines and their friends Demi and Cameron, who have unleashed a curse bringing dark misfortune into their lives.

The streaming service has revealed the first look of the series, which introduces the main cast, and they also announced its premiere date. The eight-part series will kick off on February 2, 2023. Freeridge stars Keyla Monterroso Mejia, Bryana Salaz, Tenzing Norgay Trainor, and Ciara Riley Wilson.

Jamie Uyeshiro, Eddie Gonzalez, and Jeremy Haft make up the showrunning team. Lauren Lungerich and Jamie Dooner are executive producers and co-creators. There are few specifics about what will happen in the upcoming series, although it seems to be a slight departure from the parent series.

Catch the first look images below.

Four teen friends work to reverse a curse after a peculiar old box seems to bring misfortune — and more — into their lives.