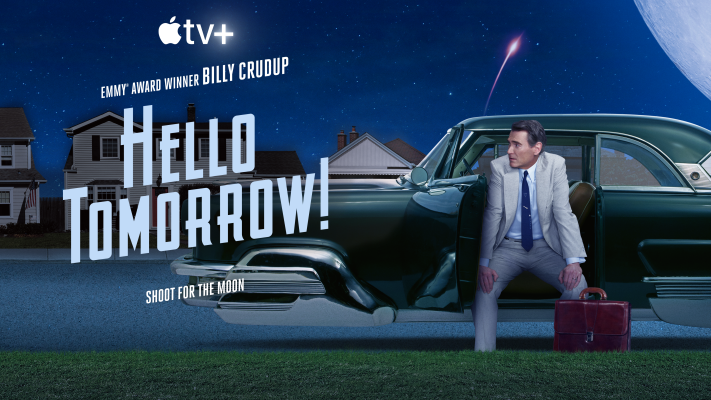 Apple TV+ revealed the trailer for the upcoming dramedy series “Hello Tomorrow!”. It will be a ten-part series, with each episode having a half-hour run time. You can expect its first three episodes to premiere on the streaming service platform on Friday, February 17, 2023, followed by one new episode weekly, every Friday through April 7, 2023.

Hello Tomorrow! has a retro-future setting. The story centers on a team of traveling salespeople selling moon timeshares. Jack, played by Crudup, is a salesperson with enormous talent and desire. His unwavering belief in a better tomorrow motivates his team and cheers up his desperate clients, but he also runs the risk of being dangerously lost in the ideal that keeps him going.

Set in a retro-future world, “Hello Tomorrow!” centers around a group of traveling salesmen hawking lunar timeshares. Billy Crudup stars as Jack, a salesman of great talent and ambition, whose unshakeable faith in a brighter tomorrow inspires his coworkers, revitalizes his desperate customers, but threatens to leave him dangerously lost in the very dream that sustains him.