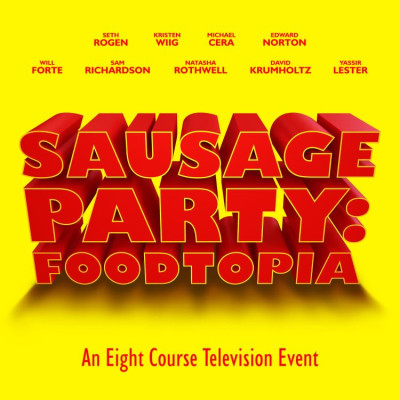 Sausage Party: Foodtopia is coming on Prime Video sometime around 2024. In a press release, they recently announced the spin-off series of the 2016 adult animated film. The specifics of the plot are being kept tightly under wraps. It will premiere exclusively on Prime Video in more than 240 countries and territories worldwide.

“Film used to be the superior art form to television, and we humbly reached the pinnacle of what can be achieved with film in our remarkable opus, Sausage Party. But now that film is completely dead and TV is the forever king of entertainment, we’ve decided to continue the epic adventures of our culinary crew in the soon-to-be-legendary televised masterpiece Sausage Party: Foodtopia. It’s got all the heart, double the puns, and triple the food-on-food sex. In other words, it’s exactly what the world needs right now,” said Rogen and Goldberg in a press release from Amazon.

Sausage Party: Foodtopia is executive produced by Ariel Shaffir and Kyle Hunter, who also serve as showrunners. Shaffir and Hunter co-wrote the 2016 animated feature film with Seth Rogen and Evan Goldberg. Rogen, Goldberg, James Weaver, and Alex McAtee will executive produce via Point Grey Pictures. Conrad Vernon, who co-directed the feature film, returns as supervising director for the series and will also executive produce alongside Annapurna Television's Megan Ellison and Patrick Chu, and Andrew Millstein. Sausage Party: Foodtopia is a co-production of Annapurna Television, Sony Pictures Television, and Amazon Studios. The original film was a co-production between Columbia Pictures and Great Beyond.