Home | Shows | All the Queen’s Men

Are you searching for All the Queen’s Men TV series news? You’ve come to the right place!

Get all the latest information on the All the Queen’s Men new tv show here at newshowstv.com. 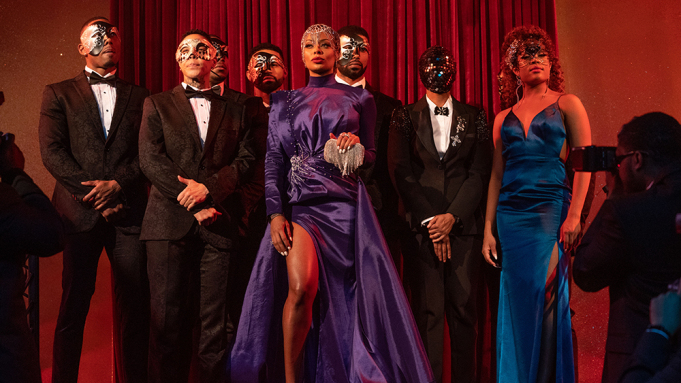 All the Queen’s Men Status: Aired

BASED ON THE POPULAR BOOK, LADIES NIGHT, BY CHRISTIAN KEYES, "ALL THE QUEEN'S MEN" STARS ACTRESS, MODEL, TV HOST AND ENTREPRENEUR EVA MARCILLE

New York, NY - August 26, 2021 - BET+ and Tyler Perry Studios will premiere all 10-episodes of the new scripted series "All The Queen's Men" exclusively on BET+ on Thursday, September 9th.

Based on the popular book Ladies Night, created by actor Christian Keyes, whom also serves as a writer for the series, the one-hour drama centers around the life of "Marilyn 'Madam' DeVille," played by Eva Marcille. Madam is a fierce businesswoman who is at the top of her game in the nightclub industry and is surrounded by a band of trusted employees who are down to make sure that she is successful. But Madam, a self-proclaimed boss, soon discovers that more money and more power mean more problems. Will Madam retain reign as she navigates this dangerous and sexy society? Will the sensuous world of exotic dancing cost Madam her queendom and potentially her life?

Created by Keyes, "All The Queen's Men" is one of the first shows from Tyler Perry Studios' scripted development arm, Pitch Black Development LLC, headed by the studio's President of Production & Development, Michelle Sneed. The series receives an unprecedented episode order increase by BET+ from eight half-hour episodes to ten one-hour episodes.

The talented cast of "All The Queen's Men" includes:

· EVA MARCILLE as "MADAM (Marilyn Deville)" a savvy, powerful, uncompromising businesswoman who owns a high-class male strip club that she runs fairly but with a firm hand; she's unafraid to do whatever it is she has to do to keep her business going.

· SKYH ALVESTER BLACK as "AMP "ADDICTION ANTHONY", a dancer with a hidden past who has found difficulty getting hired after being released from prison, so he goes to work as a bouncer/doorman in Madam's club, Eden.

· CANDACE MAXWELL as "DJ DIME" the resident DJ at Club Eden. She is ambitious and looks to Madam as a mentor.

· RACQUEL PALMER as "BLUE" Madam's chief of security. Blue is frequently seen at Madam's side when things get a little dicey.

· MICHAEL 'BOLO' BOLWAIRE as "DOC" one of the male strippers at Club Eden. Doc gets along well with his fellow dancers and a little too well with one of Eden's patrons.

· KEITH 'FATAL ATTRACTION' SWIFT as "BABYFACE", is the oldest dancer of the group, though he doesn't look it. He's questioning the number of days he has left at the club and his many client entanglements cause him plenty of drama.

· DION ROME as "EL FUEGO", one of the dancers at Madam's Club Eden who is a bit flirtatious with Madam. He loves who he loves and is quite the techy.

· JEREMY 'MASTERPIECE' WILLIAMS as "MIDNIGHT" a confident and tough male stripper who sparks a different vibe in Madam than the other strippers. She enjoys him though it's hard to say how personal their relationship is.

· CHRISTIAN KEYES as "THE CONCIERGE" is a calmly intense hitman, and member of the Damascus family, hired to blackmail Madam.