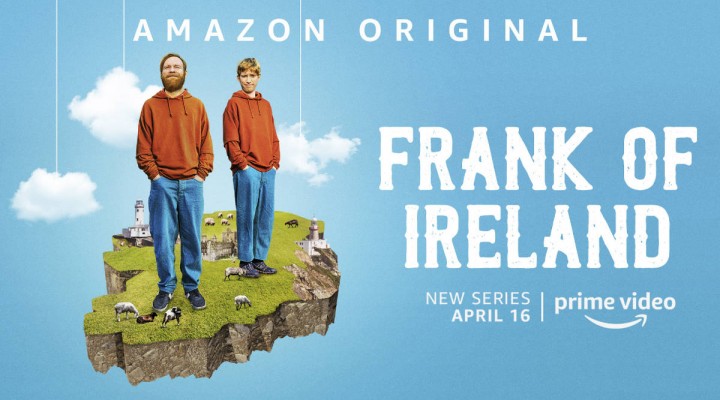 Also be sure to keep track of all the Frank of Ireland 2021 TV premiere dates.

Amazon Prime Video released the official trailer today for Frank of Ireland, a hilarious and irreverent new comedy penned by brothers Brian and Domhnall Gleeson, and Michael Moloney. All six, half-hour episodes will premiere on Prime Video on Friday, April 16, in the US, Canada, and Australia.

About Frank of Ireland

Frank of Ireland is a physical and ridiculous brand of humor with an original twist. Brian Gleeson (Peaky Blinders, The Bisexual), stars as Frank Marron, a 32-year-old catastrophe; a misanthropic fantasist in arrested development who's convinced that the world owes him. He's also our hero. Frank is newly single and still lives at home with his mother, Mary (Pom Boyd, Rosie). He's a self-proclaimed musician with a tenuous hold on reality, and hasn't written a song or played a gig in years. His ex-girlfriend Áine (Sarah Greene, Dublin Murders) has just found a new boyfriend, and Frank may be finding that a tad difficult. Luckily, Frank has a loyal best friend, Doofus, (Domhnall Gleeson, Star Wars: The Force Awakens) whose full-time job is clearing the debris left in Frank's wake. Set in an idyllic suburb of Dublin, Frank of Ireland is the hilarious story of a man's hapless search for respect, as he struggles to grow up and get his life together, and hopefully not burn everything to the ground in the process.

Frank of Ireland is executive produced by Clelia Mountford and Sharon Horgan for Merman, Brian Gleeson, Domhnall Gleeson, and Michael Moloney. The series is a co-production between Channel 4 and Amazon Studios, and is produced by Rory Gilmartin and directed by MJ Delaney for Merman.

Frank of Ireland with the Gleeson Brothers

Channel 4 and Amazon Studios are frankly gleeful to announce the commission of Frank of Ireland, a brand-new series from Sharon Horgan and Clelia Mountford’s Merman starring Brian Gleeson. A co-production between Channel 4 and Amazon Studios, the 6x30 series is the first comic vision penned by brothers Brian and Domhnall Gleeson and Michael Moloney.

Frank Marron, played by Brian Gleeson (Peaky Blinders, The Bisexual), is a 32-year-old catastrophe. A misanthropic, narcissistic, fantasist in arrested development who thinks the world owes him something. But, nonetheless, he’s our hero. They don’t all wear capes, okay?!

Frank lives in Dublin with his mother Mary (Pom Boyd, Rosie, Rialto,Snakes and Ladders), and that’s fine. He is single and his pocket money hasn’t increased in a decade or more, but you know what?! That’s fine too. Frank is a musician, understood? He hasn’t written a song or played a gig in seven years and five months, but that is totally, 100% fine. His ex-girlfriend Aine (Sarah Greene, Dublin Murders, Rosie, Ransom) has a new boyfriend Peter-Brian (Tom Vaughan-Lawlor, Dublin Murders, Rialto, Avengers: Endgame) for the first time since they split, and Frank may be finding that a tad difficult, alright? When did they part, you ask? About seven years and five months ago, give or take a day, but that’s a total coincidence, just in case you’re wondering. It’s all absolutely fine. Frank is fine.

Frank is also fine because of his wingman (read gopher) Doofus, played by Domhnall Gleeson (The Revenant, Ex-Machina, The Force Awakens). Doofus foolishly thinks they are best friends and it’s his job to blow smoke up, facilitate and attempt to fix the relentless debris in Frank’s wake. It’s a big job for such a fellow.

Frank of Ireland is a physical and ridiculous brand of humour with an original twist. Filming in Dublin and Belfast has just begun with the transmission date on Channel 4 to be announced in due course (probably when Frank feels like it). It will be available on Amazon Prime Video in the US, Canada and Australia.

Brian, Domhnall, and Michael Moloney said: “We’re so excited to work with MJ, Sharon, and Clelia ﻿on this, our first and (we’ve been told) last television series.”

Sharon Horgan, Merman Co-founder, added: “Working with the Gleeson Brothers has been like living in a very funny, existential dreamscape. I laughed so much making the pilot that it became annoying. So Clelia and I are very glad and relieved they still chose to make this series with us.”

Fiona McDermott, Head of Comedy at Channel 4, says: “We’re delighted to welcome Domhnall and Brian to Channel 4 for their comedy debut. They are talented in ways Frank and his wildest dreams could only hope to emulate; we can’t wait for viewers to see the unashamedly ridiculous and hilarious new show they’ve created.”

The series has been commissioned for Channel 4 by Head of Comedy Fiona McDermott and Commissioning Editor Jack Bayles and is written by Brian and Domhnall Gleeson, and Michael Moloney. For Merman, Executive Producers are Clelia Mountford and Sharon Horgan along with Brian Gleeson, Domhnall Gleeson and Michael Moloney. The series is produced by Rory Gilmartin and Directed by MJ Delaney for Merman.