Are you searching for The Outlaws TV series news? You’ve come to the right place!

Best 2022-23 TV Shows
Get all the latest information on the The Outlaws new tv show here at newshowstv.com.

There are 100s of new 2022 TV shows and new 2023 series coming your way. The Outlaws Season 1 will be with us eventually, but when? We gather all the news on the series premiere of The Outlaws to bring you the most accurate The Outlaws coming soon news and premiere date. 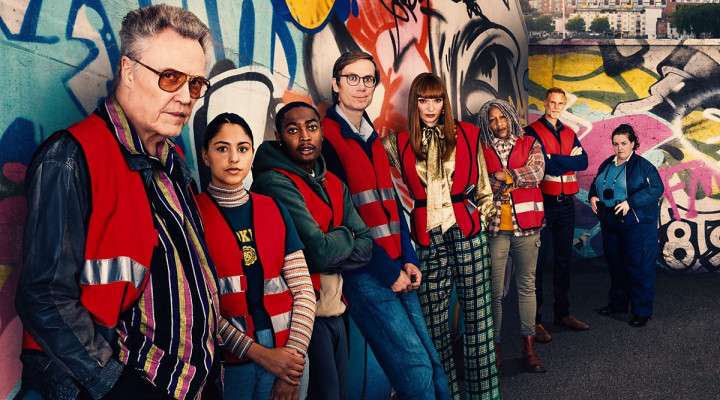 Whether The Outlaws is ultimately cancelled or renewed for Season 2 will be revealed, but one thing is for sure, The Outlaws is on our new and 2022 upcoming TV shows list!

It's Clean-Up Time for These Outlaws...

Prime Video released the official trailer and key art for the first season of The Outlaws, from award-winning writer and director Stephen Merchant (The Office) and Elgin James (Mayans M.C., Lowriders). All six episodes of the Amazon Original series will premiere on Prime Video on Friday, April 1 in the U.S., Canada, Australia, New Zealand, and Nordic countries, following an incredibly successful series premiere on BBC One and BBC iPlayer in the UK.

The Outlaws is a comedy thriller about a disparate group of lawbreakers thrown together to complete a community service sentence. Seven strangers from different walks of life are forced to work together to renovate a derelict community center. When one of their number gets dragged into a dangerous world of organized crime, they unite in ways none of them thought possible. The series stars Rhianne Barreto (Hanna, Dixi) as Rani, Gamba Cole (Hanna, Guerrilla) as Christian, Stephen Merchant as Greg, Christopher Walken (Severance, The Deer Hunter) as Frank, Eleanor Tomlinson (Poldark, The Nevers) as Lady Gabriela, Darren Boyd (Trying, Fortitude) as John, Clare Perkins (The Wheel of Time, Suspicion) as Myrna, and Jessica Gunning (Back, Fortitude) as Diane.

The Outlaws is a Big Talk and Four Eyes production co-created by Stephen Merchant - who also serves as an executive producer, director, and writer - and Elgin James. Luke Alkin, Kenton Allen, and Matthew Justice also serve as executive producers for Big Talk. The Outlaws is co-produced by BBC One and Amazon Studios. Global distribution is handled by BBC Studios. The pickup of the show's second season was announced in November.

The Outlaws is a comedy thriller series from multi-award-winning writer and director Stephen Merchant, originally created by Merchant and Elgin James (co-creator of US series Mayans M.C.) The series follows seven strangers from different walks of life forced together to complete a Community Payback sentence in Bristol. The Outlaws series one is the BBC's biggest comedy launch this year and has been streamed 11m times on BBC iPlayer so far. Following on directly from the first series, The Outlaws still have time to serve on their sentences - but now they must face the fallout from their actions. If they thought the criminal underworld or the local police were done with them, they are sorely mistaken. The Outlaws must depend on one another while working with unlikely allies to atone for their sins - but can they save themselves without sacrificing their souls?