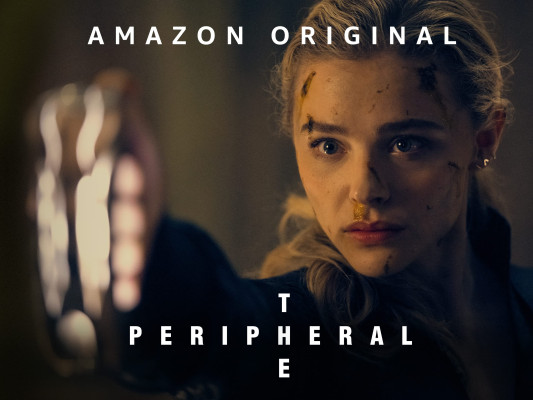 Prime Video releases the official trailer for their upcoming sci-fi series, The Peripheral, from the minds that created Westworld, Jonathan Nolan, and Lisa Joy. The story is based on the bestselling novel by William Gibson of the same name, published in 2014. It revolves around a woman who learns about a hidden connection to another reality and her tragic future. You can expect it to premiere on the streaming service on October 21, 2022.

Chloe Grace Moretz (Kick-Ass) plays Flynne Fisher, a woman trying to put her broken family back together in a remote area of a future America. “Something I really love about it, it has this sense of home and humanity which is something we lose in sci-fi,” Moretz told the crowd. “No matter how far we go into the future it always boomerangs back home. We just had so much fun figuring those little moments out and bringing the humanity in. That’s something I really haven’t seen in sci-fi.”

About The Peripheral TV Show

Stuck in a small Appalachian town, a young woman’s only escape from the daily grind is playing advanced video games. She is such a good player that a company sends her a new video game system to test…but it has a surprise in store. It unlocks all of her dreams of finding a purpose, romance, and glamour in what seems like a game…but it also puts her and her family in real danger.