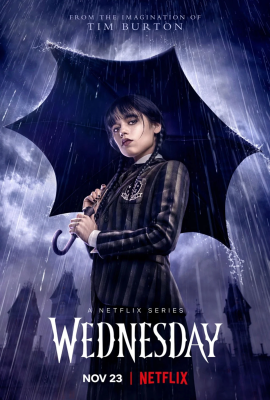 Netflix released the full official trailer for the highly anticipated live-action series, from the imagination of Tim Burton and starring Jenna Ortega, Wednesday. The series reimagines the characters of the Addams Family that started as a cartoon in 1938. The series premieres on Wednesday, of course, November 23.

The trailer reveals that Fred Armisen will play the pale Uncle Fester and surprises the audience with a reveal of Christina Ricci’s role as she returns as Ms. Thornhill, a teacher in the academy. Furthermore, it takes a closer look into Nevermore Academy and presents secret societies, a homicidal monster, and a hidden library.

The show has a strong ensemble full of well-known actors, including Gwendoline Christie as Principal Larissa Weems, Luis Guzmán as Gomez Addams, and Catherine Zeta-Jones as Morticia Addams. Isaac Ordonez will play Pugsley and George Burcea as Lurch. Get an idea of what to expect from the series by looking at the official trailer below.

“Wednesday's attempts to master her emerging psychic ability, thwart a monstrous killing spree that has terrorized the local town, and solve the supernatural mystery that embroiled her parents 25 years ago — all while navigating her new and very tangled relationships at Nevermore.”