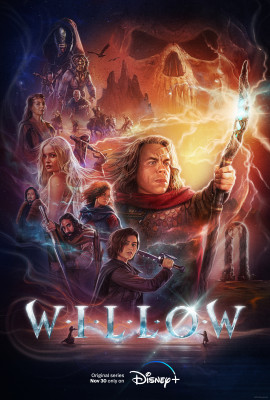 Disney+ gave the anticipating audience a special look as the premiere date for the upcoming action-adventure series, Willow, draws nearer. The series premieres on Wednesday, November 30.

The new series picks up years after the events of the original “Willow” 1988 film. It welcomes back its titular hero, Willow Ufgood, and introduces brand-new characters to the enchanted world of fairy queens and two-headed Eborsisk monsters. Warwick Davis will reprise his role as Willow. Also, the cast includes Ellie Bamber, Cailee Spaeny, and Erin Kellyma.

The story began when an aspiring sorcerer, played by Warwick Davis, is whisked away on a journey to protect an infant empress Elora Danan and vanquish the evil Queen Bavmorda from their world of Andowyne. Now, the story continues with Davis reprising his titular role, as he leads an unlikely crew of heroes on a quest to protect Andowyne from an even larger foe than they had imagined possible.