Home | Uncategorised | A Friend of The Family Official Trailer | Peacock 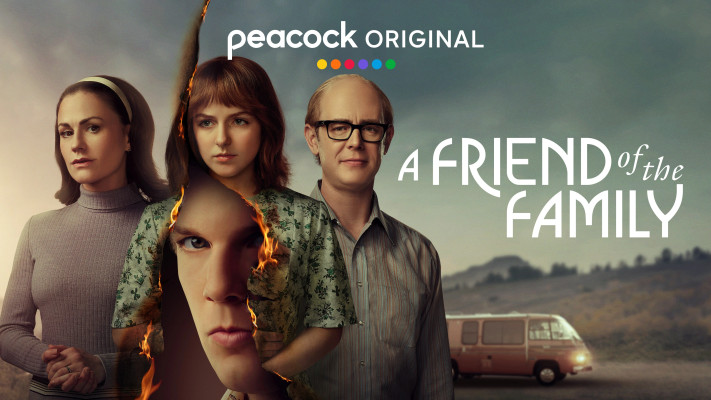 The Emmy nominee Jake Lacy, took the stage at the 74th Emmy Awards to show the trailer for the upcoming Peacock limited series, A Friend of The Family. It is a thriller based on a horrifying true story about the neighbor of the Broberg family (Jake Lacy) who they treat as a part of their family and his repeated kidnapping of their daughter.

A Friend of the Family is created by Nick Antosca (The Act), who serves as executive producer, showrunner, and writer. The victim herself produces the series – Jan Broberg, played by Hendrix Yancey (Stranger Things) and McKenna Grace (The Handmaid’s Tale), along with Mary Ann Broberg.

In a statement by Jan Broberg, she stated “We were a loving, trusting, educated family. We were not stupid or careless. So how could this happen in our neighborhood, where we knew everyone, and everyone was a friend?” Jan began. “The truth is that most predators are not strangers but people we know—people who can build trust, create special friendships, and separate family members psychologically.”

“From age 12 to 16 I was sexually assaulted and severely brainwashed by this man who I trusted,” she continued. “This story will make you talk, shout, cry — and it will make you angry. Good. The team of writers, actors, designers, directors and producers led by Alex Hedlund, Eliza Hittman, and Nick Antosca have captured the heart of how good people can be manipulated and their children victimized. Our story is relatable because so many families have direct experience with this sort of abuse. I hope that our story will start conversations — because secrets live in darkness and silence.”

About A Friend of The Family TV Show

A Friend of the Family is based on the harrowing true story of the Broberg family, whose daughter Jan was kidnapped multiple times over a period of years by a charismatic, obsessed family “friend.” The Brobergs — devoted to their faith, family, and community — were utterly unprepared for the sophisticated tactics their neighbor used to exploit their vulnerabilities, drive them apart, and turn their daughter against them. This is the story of how their lives were permanently altered — and how they survived.