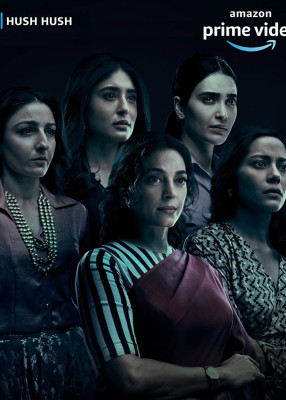 Amazon Prime Video gives fans a clear glimpse of their upcoming 7-episode murder mystery series Hush Hush, premiering this September 22. It stars (Juhi Chawla) a powerful lobbyist Ishi Sangamitra, (Soha Ali Khan) an ex-investigative journalist Saiba Tyagi, (Shahana Goswami) a self-made fashion designer Zaira Shaikh, and (Kritika Kamra) a trapped-in-society Dolly Dalal. It follows the story as they get entangled in something sinister one night, where they start falling down a rabbit hole of lies and secrets. Their secrets become essential for survival now that their comfortable, privileged environment turns perilous.

The cast and the crew are predominantly women. Tanuja Chandra, the series director, and executive producer is behind the seven episodes. Kopal Naithani directed two episodes, and Ashish Pandey directed one. The gripping story is by Shikhaa Sharma, who also serves as an executive producer and screenplay. Also, there are additional stories by Ashish Mehta. National Award-winning writer Juhi Chaturvedi (Gulabo Sitabo, Piku, Sardar Uddham Singh) has penned the dialogues. This series is a production of the Vikram Malhotra-led Abundantia Entertainment. It will be streamable for Prime members in India and in 240 other countries and territories.

After a dangerous encounter at a party, four friends find themselves hurling down a rabbit hole of lies, deceit, and secrets. As their safe, privileged world turns dark and dangerous, the secrets they keep become the bond for their survival. An intelligent cop is in pursuit, as the four friends try to keep up this deception.