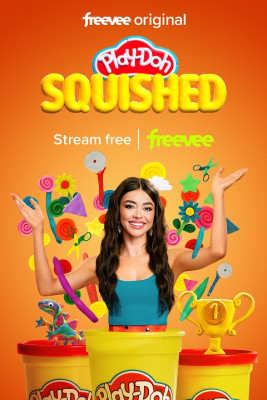 Amazon Freevee dropped the trailer for their new original series Play-Doh Squished and confirmed its premiere date. It stars Sarah Hyland (Modern Family) as the host, Play-Doh expert Jason Loik, and two standing judges, painter Alexandra Nechita and sculptor Gil Grimmett. The first episode debuts exclusively on Freevee on November 11 in the United States and the United Kingdom. New episodes will be accessible on the service every Friday until February 24, 2023.

This Play-Doh competition series tests the artistry of three teams as they go toe-to-toe in exciting challenges. It offers a fresh concept in every episode to motivate groups as they create their epic Play-Doh world. The winning team will be the Play-Doh champs.

From Amazon Studios, Entertainment One (eOne), and Hasbro, Play-Doh Squished is the ultimate Play-Doh competition. Three teams of adults and kids go toe-to-toe in exciting challenges—all designed to test their artistry, speed, and skill. First, they’ll face a wild “mini-challenge,” followed by a race through the colorful arena, all leading to the final test of their imaginations—creating an epic Play-Doh world. One team will become our Play-Doh champs, and the others will get squished!