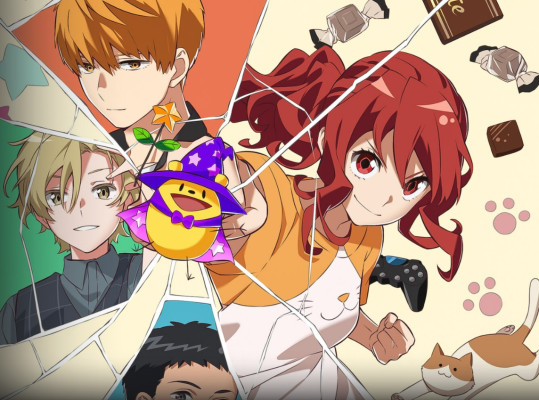 Attention to all anime fans! You can now watch the trailer and the official art for Romantic Killer. This Netflix anime is an adaptation of the manga of the same name by Wataru Momose. The entire season will be available for streaming on your chosen devices this October 27.

This romantic comedy series follows Anzu, a non-heroine type high school girl. Romance is the last thing in her thoughts as she lives her best single life; that is, until a small match-making wizard abruptly transforms her life into a corny rom-com. It centers on the story as she enters the world of a dating sim video game (a world full of hot guys) and gets her life turned upside down.

Anzu Hoshino is a “non-heroine type” high school girl who pays no attention to fashion or romance and spends every day playing video games. When the wizard Riri suddenly appears, Anzu is forced to participate in the Magical World’s project to stop population decline. This romantic comedy depicts what happens when Anzu goes from living a life immersed in her three favorite things — video games, chocolate, and cats — to being surrounded by handsome guys. Anzu is steadfast in her claim that she never wanted to live in a dating simulation game. She meets a handsome guy who is so popular it hurts, a clean-cut and athletic childhood friend, and a beautiful rich young guy who is naive about the outside world. By meeting Anzu, they all begin to change gradually.