Are you searching for All of Us Are Dead TV series news? You’ve come to the right place!

Best 2022-23 TV Shows
Get all the latest information on the All of Us Are Dead new tv show here at newshowstv.com. 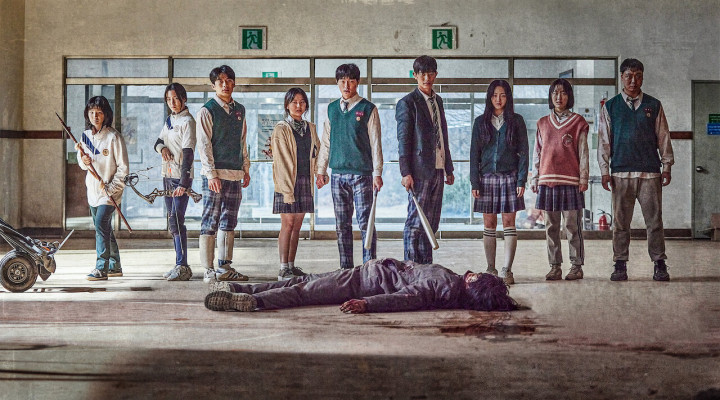 All of Us Are Dead Status: Aired


All of Us Are Dead TV Show Synopsis:

All of Us Are Dead is based on a popular webtoon by creator Joo Dong-geun, touted as a 'Korean-style zombie graphic novel' with its wild imagination, gripping story line, and meticulous details. Ever since the news was out that Netflix was adapting it into a series, the project has become highly anticipated. Director Lee JQ who touched off multiple crazes following the TV series Beethoven Virus, The Legendary Police Woman, and the recent hit film Intimate Strangers. And Writer Chun Sung-il known for his unlimited range across various genres with TV series LUCA: The Beginning, The Slave Hunters, and film series The Pirates partnered up to capture a group of teenagers' desperate struggle for survival in just another ordinary school. The cast of young, talented actors including Park Ji-hu, Yoon Chan-young, Cho Yi-hyun, Lomon, Yoo In-soo, Lee You-Mi and Lim Jae-hyeok bring a youthful vibe, adding color to the show.

SEOUL, April 13, 2020 - Netflix Inc., the world’s leading streaming entertainment service, announced that it will team up with director Lee JQ (Beethoven Virus, Damo: The Legendary Police Woman, Intimate Strangers) to produce a new Netflix original series All of Us Are Dead.

All of Us Are Dead is about a group of high school students who are faced with an extreme crisis situation when they become trapped in their school, while a zombie virus spreads like a wildfire. It’s based on the chart-topping Korean webtoon called Now at Our School (literal translation of its Korean title, 지금 우리 학교는), which has been also well received in Indonesia, Thailand and Taiwan.

Following in the footsteps of the popular Netflix original series Kingdom, All of Us Are Dead is poised to write an exciting new chapter in the Korean zombie genre, as director Lee brings fresh energy through the solid narrative and the attention-grabbing cinematography he is well known for.

All of Us Are Dead is written by Chun Sung-il, and directed by Lee JQ and Kim Nam-su. It will be produced by JTBC Studios in association with Film Monster, and will premiere worldwide, only on Netflix.