Are you searching for Amy Schumer Learns to Cook TV series news? You’ve come to the right place!

Get all the latest information on the Amy Schumer Learns to Cook new tv show here at newshowstv.com. 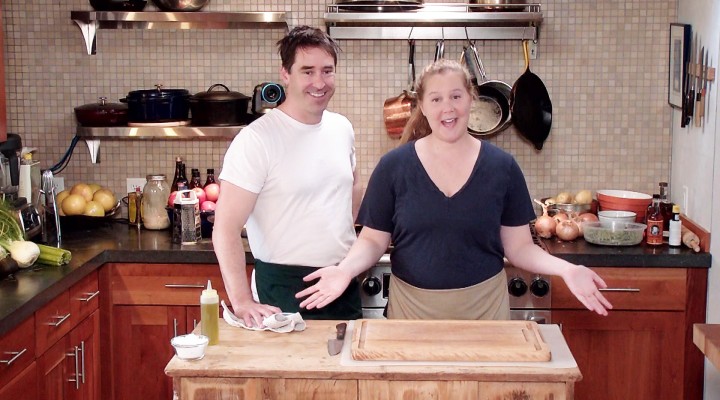 Acclaimed stand-up comedian and Emmy Award(R)-winning actress Amy Schumer and her husband, James Beard Award-winning chef Chris Fischer, have quarantined themselves, their son, his nanny Jane, and their dog at their home in the woods as they share a behind-the-scenes look at their lives in the new Food Network series Amy Schumer Learns to Cook. Premiering Monday, May 11th at 10pm ET/PT with back-to-back half-hour episodes each week, Chris and Amy bring viewers into their kitchen and share what home-life is like, including Jane's promotion to part-time camera operator when the baby is napping. During this unusual time, phoning a friend becomes a reality as the couple also stay in contact with family and some surprise celebrity friends via video, all-the-while Chris, who specializes in farm-to-table cuisine, creates comfort food through eight episodes with a whole lot of fennel as Amy takes the lead tending to the bar.

"Watching Amy and Chris is intimate, real, fun and just great TV," said Courtney White, President, Food Network. "The nanny holds the camera, as Chris makes incredibly delicious food and Amy's sharp wit delivers laugh out loud moments all the way through. Mix that with poignant moments of a family sharing their challenges during this pandemic and you have a series that many will relate to and some will likely become addicted to."

"We hope people like the show, we did our best," said Schumer and Fischer.

In the double-episode premiere, Amy begins her culinary education where most of us begin the day - at breakfast. Chris shows Amy how to make a perfectly Poached Egg, some Crispy Bacon, and a Celery and Fennel Salad, while Homemade Latkes are frying up and Amy crafts an Old-Fashioned cocktail to start the day. Chris then works on a menu for some of Amy's favorite late-night treats, including Homemade Fried Rice, Chicken Wings, Peanut Butter Cup Cookies, and Amy's favorite snack to eat in bed, Matzah with Butter, while Amy makes a Moscow Mule for a night cap. Other episodes feature Amy and Chris enjoying taco night with Tempura-Battered Fish Tacos, and Chris and Amy taking time to enjoy a quarantine movie night dinner with Crispy Potatoes, Lamb Sliders and a very inventive Greek Salad Dip.