Are you searching for COPS: All Access TV series news? You’ve come to the right place!

Get all the latest information on the COPS: All Access new tv show here at newshowstv.com. 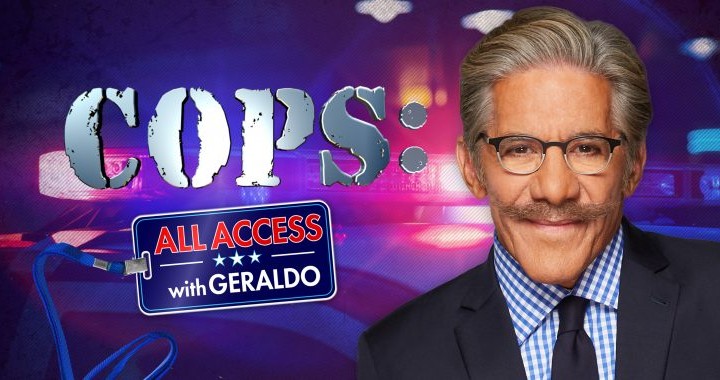 NEW YORK -- FOX Nation will debut a new limited series entitled, COPS: All Access with Geraldo hosted by FOX News Channel's correspondent-at-large Geraldo Rivera on Friday, October 1st. In conjunction with the return of the iconic series COPS, Rivera will recap the first four episodes of Season 33 with the executive producer of COPS, Morgan Langley, as well as reminisce about the history of the cult classic, which was created by his father John Langley in the 1980s. Episode one of the four-part series will also detail the show's origins and describe the current climate surrounding policing in America. The three remaining episodes will drop each consecutive Friday throughout October.

Rivera also recently signed a new multi-year deal to remain with FOX News Media. He will continue serving as a correspondent-at-large contributing most prominently to FOX News Channel and FOX Nation. Rivera, who joined the network in 2001 as a war correspondent, has received more than 170 awards for journalism, including the prestigious George Foster Peabody Award, three national and seven local Emmys, two Columbia-Dupont and two additional Scripps Howard Journalism Awards. His journalism career spans more than 50 years having worked for WABC-TV in New York as well as ABC News, NBC News, CNBC and launching his own syndicated talk show.

In commenting on the announcement, FOX News Media CEO Suzanne Scott said, "Geraldo has been an important voice on FOX News Channel over the last two decades and we are thrilled to have him continue to be a part of the FOX family."

Rivera added, "First of all, I'm delighted that FOX News continues to embrace this old soldier in the vivid twilight of my kinetic career. I joined FOX News in 2001 shortly after the 9/11 attacks killed friends and neighbors. The network stood committed to reporting America's unswerving commitment to seeking justice. Ten years later, I was proud to break the news to the world that the terror mastermind who engineered those terrible attacks, Osama bin Laden was dead. My two decades at Fox have been action-packed, covering everything from war to natural disasters, epidemics and urban unrest. Now, as correspondent-at-large, I'm more focused on reporting and commentary for shows like Fox & Friends and The Five and it's a blast. Through it all, I'm proud of my colleagues and deeply appreciate their professionalism and continuing support. FOX News rocks."

In commenting on his FOX Nation program, COPS: All Access with Geraldo, Rivera also said, "More than thirty years ago, I helped launch this epic program saluting the brave men and women of law enforcement. They are the thin blue line that keeps society safe. In an era where activists call for defunding the police even as the number of murders soar to record highs, too often cops are being blamed instead of the killers or crooks. So COPS is back to portray the very best in police work. The veteran producers and I pledge the show will accurately reflect the fact bad guys come in all colors and creeds. Crime is an equal opportunity offender. And COPS will be there to bust bad guys and keep us all safe."

Also contributing to COPS: All Access with Geraldo will be Corporal Eli Serrano of the Marion County Florida Sheriff's Office. Corporal Serrano was featured in Season 33 of the series, and will discuss a routine traffic stop that turned into a car chase down a dirt road, resulting in a crash. Additionally, FOX Nation host Lara Logan and FOX News Media contributor Tyrus will join the conversation to discuss the series' loyal following and the importance of highlighting law enforcement officers.

FOX Nation is a direct-to-consumer on demand streaming service designed to complement the FOX News Channel experience with a members only destination for its most passionate and loyal super fans. Featuring thousands of hours of content, the OTT product includes daily short-form conservative opinion programming and lifestyle shows, as well as historic documentaries and investigative series from a multitude of FOX News personalities at a cost of $5.99 a month/$64.99 a year. FOX Nation is available on iOS and Android devices as well as Apple TV, Web, Amazon Fire TV, Google Chromecast, Roku, Xbox One, Comcast Xfinity platforms, Cox Contour platforms, Samsung Smart TVs and Vizio.