Are you searching for Dark Winds TV series news? You’ve come to the right place!

Best 2022-23 TV Shows
Get all the latest information on the Dark Winds new tv show here at newshowstv.com.

There are 100s of new 2022 TV shows and new 2023 series coming your way. Dark Winds Season 1 will be with us eventually, but when? We gather all the news on the series premiere of Dark Winds to bring you the most accurate Dark Winds coming soon news and premiere date. 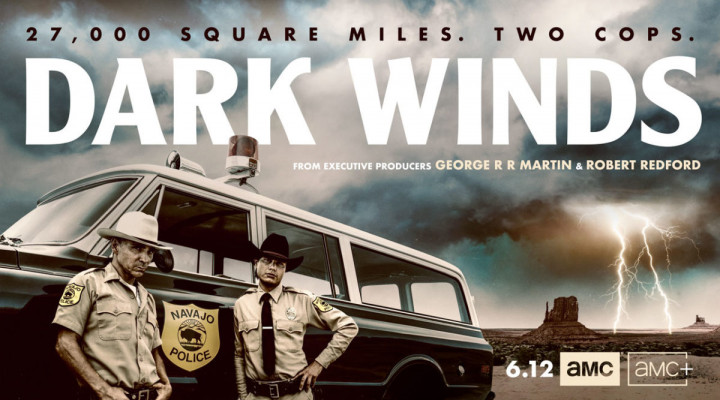 Whether Dark Winds is ultimately cancelled or renewed for Season 2 will be revealed, but one thing is for sure, Dark Winds is on our new and 2022 upcoming TV shows list!

AMC and AMC+ today released the trailer and key art of its upcoming original series, Dark Winds. The noir thriller, based on the iconic Leaphorn & Chee book series by Tony Hillerman, premieres Sunday, June 12 on AMC and AMC+ with two episodes. One new episode will debut every Sunday on AMC, and AMC+ subscribers will have advance access to an additional episode each week, beginning June 19.

Set in 1971 on a remote outpost of the Navajo Nation near Monument Valley, Dark Winds follows Lieutenant Joe Leaphorn (Zahn McClarnon, The Son, Westworld, Fargo) of the Tribal Police as he is besieged by a series of seemingly unrelated crimes. The closer he digs to the truth, the more he exposes the wounds of his past. He is joined on this journey by his new deputy, Jim Chee (Kiowa Gordon, The Red Road, Roswell, New Mexico). Chee, too, has old scores to settle from his youth on the reservation. Together, the two men battle the forces of evil, each other and their own personal demons on the path to salvation.

AMC Networks today announced that it has greenlit a new AMC Studios series called Dark Winds for AMC+ and AMC. Created and executive produced by Graham Roland (Tom Clancy's Jack Ryan, The Returned, Almost Human, Fringe), the series stars Zahn McClarnon (The Son, Westworld, Fargo), who is also an executive producer, and Kiowa Gordon (The Red Road, Roswell, New Mexico). Vince Calandra (Castle Rock, Tom Clancy's Jack Ryan, Sharp Objects) is showrunner and also an executive producer. Chris Eyre will direct the pilot and executive produce. Executive producers include George R.R. Martin, Robert Redford, Tina Elmo and Vince Gerardis. Based on the iconic Leaphorn & Chee book series by Tony Hillerman, Dark Winds is a psychological thriller that follows two Navajo police officers in the 1970s Southwest, as their search for clues in a grisly double murder case forces them to challenge their own spiritual beliefs and come to terms with the trauma of their pasts. Season one will include six episodes and is expected to premiere on AMC+ and AMC in 2022.