Are you searching for Diesel Brothers TV series news? You’ve come to the right place!

Get all the latest information on the Diesel Brothers new tv show here at newshowstv.com. 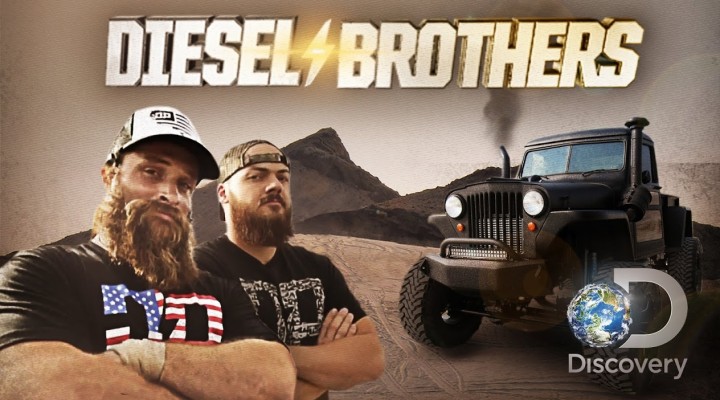 Everyone's favorite trucking team is back for a season of bolder builds, bigger trucks with more hijinks, dad jokes, and freestyling lyrics than ever before. Heavy D, Diesel Dave, The Muscle and the rest of the DieselSellerz crew are together again bringing audiences behind the scenes of their epic one-of-a-kind truck builds and an event viewers will have to see to believe. The brand-new season of DIESEL BROTHERS returns Monday, December 9 at 8pm ET/PT on Discovery Channel. Mondays will be Trucking Huge as DIESEL BROTHERS leads into an all new season of DIRTY MUDDER TRUCKERS, airing Monday, December 9 at 9pm ET/PT.

"This season is chock-full of firsts and sure to amaze audiences coast-to-coast. The dream team at DieselSellerz will attempt to build their first ever diesel-powered boat, their first electric drag-bike, and their very first mega-truck." To the DIESEL BROTHERS, nothing is impossible, and no build is too challenging. As Heavy D explains, "Really bad ideas are often the really good ideas."

Kicking off the season in style, the team first sets out to build a mobile DJ party trailer complete, of course, with a tricked-out truck to pull it. This sends Diesel Dave and The Muscle on a mission to find the perfect square-body truck, not an easy feat since square bodies are more than 30-years-old. And Sam, the team's "diesel mad scientist" has come up with a plan to power an electric mini drag bike to race a Lamborghini Huracan. Will this battery-powered bike - costing no more than $500 - beat a $250,000 car? As daylight in Utah dims, Heavy D buckles up on an 80-volt powered mini-bike putting his money where his mouth is.

The season wouldn't be complete without a few surprises up their sleeves. In true DIESEL BROTHERS fashion, the team shows no fear of any challenge that comes their way. This season DIESEL BROTHERS will go outside their comfort-zone taking their iconic builds to the track where the stakes are higher and the competition has never been muddier.

In addition to watching the series on Discovery, viewers can check out new episodes each week by downloading the Discovery GO app. Viewers can join the conversation on social media by using the hashtag #DieselBrothers and follow Diesel Brothers on Facebook, Instagram, and Twitter for the latest updates.

In the world of diesel vehicles, no one has more fun or builds bigger, badder trucks than Heavy D, Diesel Dave and their crew at Dieselsellerz. Their mega builds and awesome truck giveaways are the stuff of diesel legend. Diesel Brothers follows the team at Dieselsellerz as they trick out trucks, work hard and play harder in the process.

Starting off their business by buying used, or broken down trucks and tricking them out for sales… Heavy D and Diesel Dave use the internet/social media as marketing tool to share their best pranks and stunt driving. Millions of hits later, Dieselsellerz has become the destination for diesel lovers looking for tricked out trucks, crazy stunts, pranks and hilarious antics.

Follow the team at Dieselsellerz as they dream and execute unbelievable builds, pull elaborate and hilarious pranks and push the limits with new stunts.