Are you searching for Ghosts TV series news? You’ve come to the right place!

Get all the latest information on the Ghosts new tv show here at newshowstv.com.

There are 100s of new 2022 TV shows and new 2022 series coming your way. Ghosts Season 1 will be with us eventually, but when? We gather all the news on the series premiere of Ghosts to bring you the most accurate Ghosts coming soon news and premiere date. 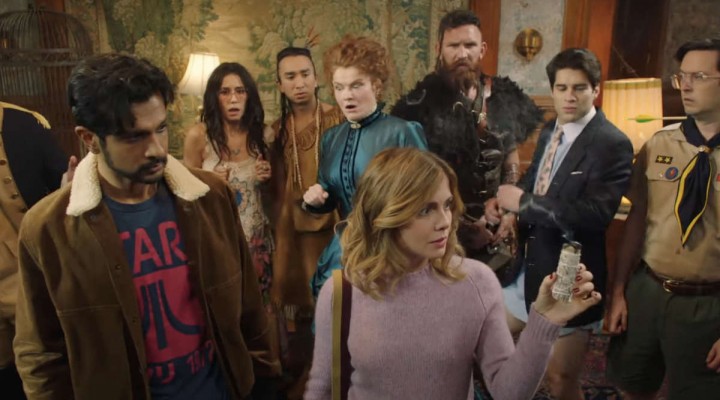 
Whether Ghosts is ultimately cancelled or renewed for Season 2 will be revealed, but one thing is for sure, Ghosts is on our new and 2022 upcoming TV shows list!

GHOSTS is a single-camera comedy about Samantha (Rose McIver) and Jay (Utkarsh Ambudkar), a cheerful freelance journalist and up-and-coming chef from the city, respectively, who throw both caution and money to the wind when they decide to convert a huge rundown country estate they inherited into a bed & breakfast - only to find it's inhabited by the many spirits of deceased residents who now call it home. The departed souls are a close-knit, eclectic group that includes a saucy Prohibition-era lounge singer, a pompous 1700's Militiaman, a '60s hippie fond of hallucinogens, an overly upbeat '80s scout troop leader, a cod-obsessed Viking explorer from 1009, a slick '90s finance bro, a sarcastic and witty Native from the 1500s, and a society woman and wife of an 1800's robber baron who is Samantha's ancestor, to name a few. If the spirits were anxious about the commotion a renovation and B&B will create in their home, it's nothing compared to when they realize Samantha is the first live person who can see and hear them. Joe Port & Joe Wiseman, Mathew Baynton, Jim Howick, Simon Farnaby, Laurence Rickard, Ben Willbond and Martha Howe-Douglas; Alison Carpenter, Debra Hayward, and Alison Owen (Monumental Television); and Angie Stephenson (BBC Studios) are the executive producers for CBS Studios in association with Lionsgate Television and BBC Studios' Los Angeles production arm. Trent O'Donnell is an executive producer (pilot only) and directed the pilot from a script by Port & Wiseman. Based on the BBC Studios distributed format.