Are you searching for Heels TV series news? You’ve come to the right place!

Get all the latest information on the Heels new tv show here at newshowstv.com.

There are 100s of new 2022 TV shows and new 2022 series coming your way. Heels Season 1 will be with us eventually, but when? We gather all the news on the series premiere of Heels to bring you the most accurate Heels coming soon news and premiere date. 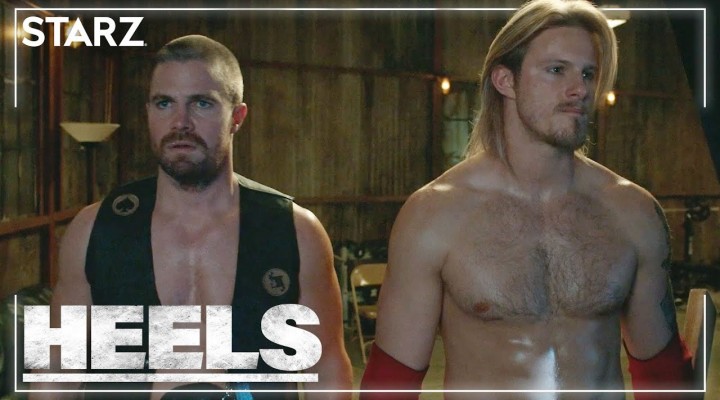 
Whether Heels is ultimately cancelled or renewed for Season 2 will be revealed, but one thing is for sure, Heels is on our new and 2022 upcoming TV shows list!

In this life you're either the hero or the heel. Stephen Amell and Alexander Ludwig star in Heels, premiering August 15 on STARZ.

Written by Michael Waldron and directed by Peter Segal, with Mike O'Malley as showrunner, Heels is a story about the men and women who chase their dreams in the world of small town pro wrestling. Set in a close-knit Georgia community, it follows a family-owned wrestling promotion as two brothers and rivals, Jack Spade (Stephen Amell) and Ace Spade (Alexander Ludwig), war over their late father's legacy. In the ring, somebody must play the good guy (Ludwig) and somebody must play their nemesis, the heel (Amell). But in the real world, those characters can be hard to live up to - or hard to leave behind.

Chris Bauer will portray "Wild Bill Hancock," a larger-than-life former wrestling star who is now a high-level pro wrestling scout. Allen Maldonado plays "Rooster Robbins," one of the best wrestlers in the circuit who always has something to prove, and always backs it up. James Harrison, Jr. is cast in the role of "Apocalypse," a been-around-the-block journeyman wrestler who's been at it for decades and has no illusions of fame or glory.

Chris Bauer most recently starred in "The Deuce" and "For All Mankind" and he portrayed Jimmy Flaherty for four seasons of the STARZ Original hit series "Survivor's Remorse." He also starred in "True Blood," the award- winning FX limited series "The People vs. OJ Simpson" and is known for his acclaimed role as union boss "Frank Sobotka" in "The Wire." Bauer will next be seen opposite Denzel Washington in the Warner Bros. film The Little Things. Other film appearances include Clint Eastwood's Sully and Money Monster, directed by Jodie Foster. Bauer is repped Peg Donegan and attorney Ira Schreck.

Allen Maldonado landed his first television role at the age of 21 in the daytime series "The Young & The Restless." After recovering from a near-fatal car accident, he appeared in the Emmy(R)-nominated drama "Judging Amy" as well as "The Shield," "Rizoli & Isles," Straight Outta Compton, Cake, The Equalizer and the feature film remake of Superfly. Maldonado most recently appeared on "You're the Worst," "The Last O.G." and "Black-ish." In addition to acting, he also runs Get It Done Records record company, Only Son Productions and Vineyards Phinest t-shirt line where a portion of the proceeds go to his foundation, Demo Nerds which provides free acting classes and services for at-risk youth and foster children in the inner cities of Los Angeles. Maldonado is repped by Red Baron Management, CAA and attorneys Ira Schreck and Carolyn Conrad.

James Harrison was signed by the Pittsburgh Steelers as an undrafted rookie free agent after going undrafted in the 2002 NFL Draft. After being cut several times, he signed with the Steelers in 2004 and played 15 seasons in the NFL (Steelers, Cincinnati Bengals, New England Patriots). The two-time Super Bowl Champion landed his first role on the big screen in the 2019 indie movie Remember Amnesia and had a guest-starring role in an episode of "S.W.A.T." ("The B-Team") that aired in 2019. Harrison is repped by UTA, attorney Jonathan Shikora and manager PR1 Communication.

"Heels" is a story about the men and women who chase their dreams in the world of small town pro wrestling. Set in a close-knit Georgia community, it follows a family-owned wrestling promotion as two brothers and rivals war over their late father's legacy. In the ring, somebody must play the good guy and somebody must play their nemesis, the heel. But in the real world, those characters can be hard to live up to - or hard to leave behind.