Are you searching for Love, Victor TV series news? You’ve come to the right place!

Get all the latest information on the Love, Victor new tv show here at newshowstv.com.

There are 100s of new 2022 TV shows and new 2022 series coming your way. Love, Victor Season 1 will be with us eventually, but when? We gather all the news on the series premiere of Love, Victor to bring you the most accurate Love, Victor coming soon news and premiere date. 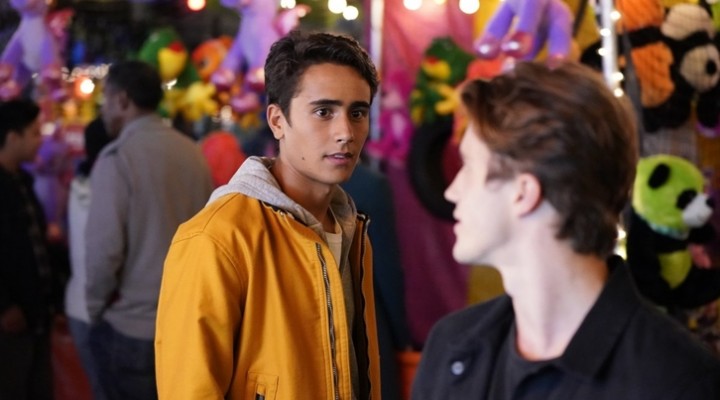 
Whether Love, Victor is ultimately cancelled or renewed for Season 2 will be revealed, but one thing is for sure, Love, Victor is on our new and 2022 upcoming TV shows list!

“LOVE, VICTOR,” ORIGINAL SERIES INSPIRED BY ACCLAIMED FILM “LOVE, SIMON,” TO PREMIERE ON HULU THIS SUMMER
Originals
February 24, 2020 – “Love, Victor,” the upcoming series inspired by the groundbreaking 2018 film “Love, Simon,” will now premiere on Hulu as a Hulu Original this June. From 20th Century Fox Television, the show, originally titled “Love, Simon” and slated to debut on Disney+, recently completed production on its 10-episode first season and a writers room has been opened to begin exploring storylines for a potential second season.

Set in the world of the 2018 groundbreaking film “Love, Simon,” which was inspired by Becky Albertalli’s acclaimed novel, “Simon Vs. the Homo Sapiens Agenda,” the series follows Victor, a new student at Creekwood High School on his own journey of self-discovery, facing challenges at home, adjusting to a new city, and struggling with his sexual orientation. When it all seems too much, he reaches out to Simon to help him navigate the ups and downs of high school. The film’s original writers Isaac Aptaker (“This Is Us“) and Elizabeth Berger (“This Is Us“) serve as executive producers alongside Brian Tanen (“Grand Hotel”), Jason Ensler (“The Passage”), Isaac Klausner (“The Hate U Give”), Marty Bowen (“First Man”), Adam Fishbach (“Narcos”), Wyck Godfrey (“I, Robot”), Pouya Shahbazian (“Divergent”) and Adam Londy.

“’Love, Victor’ is funny, heartfelt and deeply affecting, and we were incredibly taken with the project,” said Craig Erwich, SVP Originals, Hulu. “The show’s contemporary lens and honest storytelling make it a perfect fit for the millions of fans on Hulu who already watch and see themselves in series like ‘Looking For Alaska,’ ‘Pen15’ and ‘Grown-ish.’”

“With Hulu now an integral part of our streaming family, our teams are closely collaborating and we have the unique ability to choose the best home for our original productions. All of us at Disney+ are incredibly proud of ‘Love, Victor’ and know the series will be a perfect addition to Hulu’s strong slate of young adult programming,” said Ricky Strauss, president, Disney+ Content and Marketing.

The series’ executive producers (and screenwriters of the original film) Isaac Aptaker and Elizabeth Berger added, “We are beyond excited that ‘Love, Victor’ will be joining Hulu’s fresh and authentic lineup of high school series and that we’ll be able to continue telling honest, important coming of age stories with our terrific group of writers and our tremendous ensemble.”

“Love, Victor” stars Michael Cimino (“Anabelle Comes Home”) as Victor alongside Ana Ortiz (“Whiskey Cavalier,” “Ugly Betty”) as Isabel, Victor’s smart and warm mother who loves her husband and her family, but is under a lot of pressure as they move their family across the country. The cast also includes James Martinez (“One Day at a Time”) as Armando, Victor’s regular blue collar “guy’s guy” father who loves his family deeply and works hard for his family. Isabella Ferreira (“Orange is the New Black”) plays Pilar, Victor’s sullen younger sister in the throes of teenage angst, while Mateo Fernandez will make his acting debut as Adrian, Victor’s adorable, good-natured little brother. Rachel Naomi Hilson (“This Is Us”) stars as Mia, Victor’s whip-smart friend with a quick wit and easy laugh, with Bebe Wood (“The Real O’Neal’s,” “The New Normal”) as her quirky and social media-obsessed best friend, Lake. George Sear (“Will,” “Into the Badlands”) portrays Benjie, Victor’s confident and charming classmate, with Anthony Turpel (“The Bold and the Beautiful”) as Felix, Victor’s lanky, awkward new neighbor, and Mason Gooding (“Book smart”) as Andrew, Creek wood’s cocky and popular basketball-loving jock.