Home | Shows | Maya and the Three

Are you searching for Maya and the Three TV series news? You’ve come to the right place!

Get all the latest information on the Maya and the Three new tv show here at newshowstv.com. 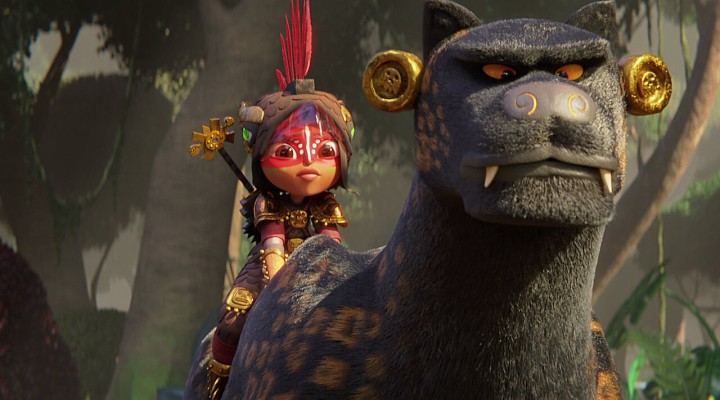 Maya and the Three Status: Aired

Multiply your courage, by the power of three on an epic journey to save a fantastical world. Three outcasts from three distant lands, Chimi (The Skull Warrior), Rico (The Rooster Wizard) and Picchu (The Puma Barbarian) will join Maya (The Eagle Warrior) on her mighty quest to stop Lord Mictlan (The god of war) and fulfill an ancient prophecy. Maya and the Three begins October 22 only on Netflix. Set a remind now: https://www.netflix.com/mayaandthethree

An Animated Event Told in 9 Chapters

In a fantastical world, where magic turns the world and four kingdoms rule the lands, a brave and rebellious warrior princess named Maya is about to celebrate her fifteenth birthday and coronation. But everything changes when the gods of the underworld arrive and announce that Maya's life is forfeit to the God of War - a price she must pay for her family's secret past. If Maya refuses, the whole world will suffer the gods' vengeance. To save her beloved family, her friends, and her own life, Maya embarks on a thrilling quest to fulfill an ancient prophecy that foretells the coming of three great warriors who will help her defeat the gods and save humankind.

From creator Jorge R. Gutiérrez (EL TIGRE, THE BOOK OF LIFE), MAYA AND THE THREE is a Netflix Animated Event told in nine epic chapters. Set in a fictional fantasy world, MAYA AND THE THREE is an adventure full of heart and humor, inspired by a rich, vibrant mixture of Aztec, Maya, and Inca mythology, and modern-day Caribbean culture. Starring Zoe Saldaña as Princess Maya, Gabriel Iglesias as Picchu, Allen Maldonado as Rico, Stephanie Beatriz as Chimi, Diego Luna as Zatz, Gael García Bernal as The Jaguar Triplets, Alfred Molina as the God of War, Kate del Castillo as the Goddess of Death, Danny Trejo as the God of Earthquakes, Cheech Marin as the Gods of Wind & Storm, Rosie Perez as the Goddess of Gators, Queen Latifah as Gran Bruja, Wyclef Jean as Gran Brujo, Jorge R. Gutiérrez as King Teca, Sandra Equihua as Queen Teca, Isabela Merced as the Widow Queen, Chelsea Rendon as the Goddess of Tattoos, Joaquín Cosío as the God of Bats, Carlos Alazraqui as the God of Dark Magic, Eric Bauza as the God of Jungle Animals and Rita Moreno as Ah Puch.

The trailer features "If It's To Be" performed by Kali Uchis and written by Gustavo Santaolalla. The song will be released by Interscope on October 13. Maya and the Three features an original score composed by the duo of Oscar- and GRAMMY-winning composer Gustavo Santaolalla and GRAMMY-nominated composer Tim Davies. The cinematic score will be available on October 22 from Milan Records.