Are you searching for Mountain Monsters TV series news? You’ve come to the right place!

Get all the latest information on the Mountain Monsters new tv show here at newshowstv.com. 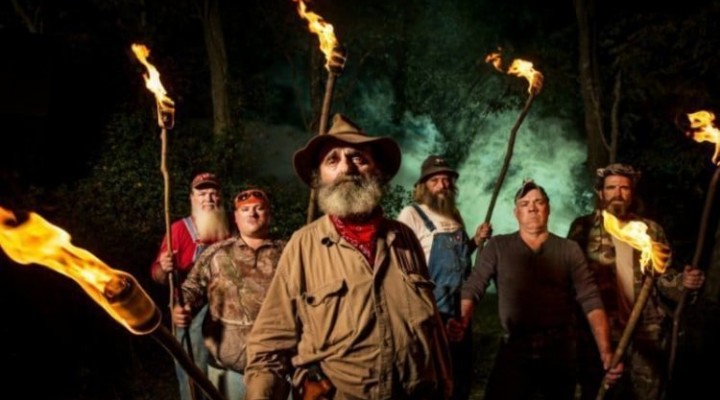 Deep in the Appalachian Mountains, creatures both legendary and terrifying lurk among the shadows, evading capture at every turn. Season 5 of the cult-classic series “Mountain Monsters,” moves to its new home on Travel Channel with a special two-hour premiere on Wednesday, August 21 at 9 p.m. ET/PT, reuniting the fearless team of hard-core trappers to confirm the sightings of these fabled monsters. Calling themselves the AIMS team – the Appalachian Investigators of Mysterious Sightings – this rip-roarin’ group of self-proclaimed “hillbilly hunters” treks through the depths of Appalachia’s mountain forests, searching for creatures of mythical origins, determined to track down proof these monsters still roam this region today.

In the two-hour season premiere, the series picks up right where it left off – with team members Trapper, Buck, Huckleberry, Jeff, Willy and Wild Bill entangled in the backwoods of the Dark Forest. Later in the episode, the clock fast-forwards 18 months to when the group reunites, visibly shaken, but still determined to finish their initial quest.

“After leaving Season Three with such an intense cliffhanger, we knew we had to broadcast this season on a larger platform, bringing this incredibly popular show from Destination America to a new home at Travel Channel for our AIMS-obsessed fans,” says Matthew Butler, general manager of Travel Channel and Destination America. “Viewers are really invested in the AIMS team and its investigations, and we are elated to finally share what truly happened in the Dark Forest, while catapulting the squad into a whole new set of intense hunts, thrilling twists and hillbilly hilarity.”

Nowhere does the mystery of Bigfoot’s existence run deeper than in the backcountry of Appalachia where, over the last 10 years alone, the Appalachian Investigators of Mysterious Sightings (AIMS) have uncovered more than a dozen different clans of bigfoot that call the mountain region home. Locals have their own names for these enormous ape-like creatures, but they’re all bigfoot in the end. AIMS travel to remote corners of the Appalachian wilderness to track and attempt to trap these mysterious creatures, proving they’re fact not folklore.