Are you searching for Mr. Pickles TV series news? You’ve come to the right place!

Get all the latest information on the Mr. Pickles new tv show here at newshowstv.com.

There are 100s of new 2022 TV shows and new 2022 series coming your way. Mr. Pickles Season 1 will be with us eventually, but when? We gather all the news on the series premiere of Mr. Pickles to bring you the most accurate Mr. Pickles coming soon news and premiere date. 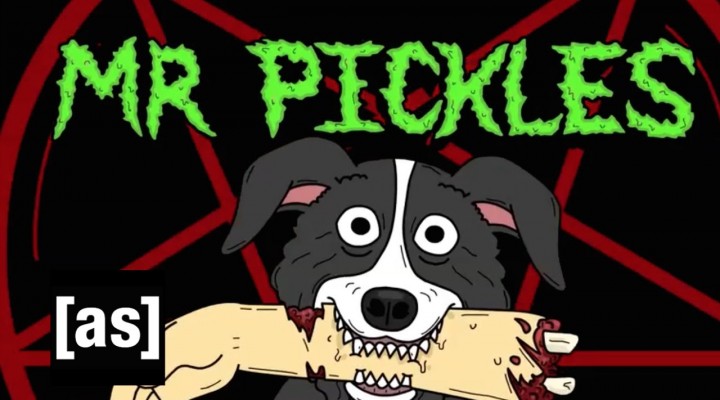 
Whether Mr. Pickles is ultimately cancelled or renewed for Season 2 will be revealed, but one thing is for sure, Mr. Pickles is on our new and 2022 upcoming TV shows list!

In Mr. Pickles, the urban sprawl of modern society pollutes the old-fashioned town where the Goodman family lives with their lovable pet dog, Mr. Pickles, a deviant collie with a secret satanic streak. From creators Will Carsola and Dave Stewart.

"Mr. Pickles" Wags and Tears His Way to Season Four!

Mr. Pickles, Old Town's cutest dog is back for a fourth season of tail wagging, flesh ripping and head decapitating - good old classic American adventure, beginning Sunday, November 17th at Midnight ET/PT on Adult Swim. After Mr. Pickles framed Grandpa for murder in the Season 3 finale, Sheriff learns of Grandpa's whereabouts, and heads out of the country to track him down. Meanwhile Grandpa has a new determination to finally end things with Mr. Pickles, once and for all.

Set in the small, old-fashioned world of Old Town, Mr. Pickles centers on the lives of the Goodman family and their innocent six-year-old son Tommy, whose best friend is the family's lovable and sometimes naughty, Border Collie, Mr. Pickles. Mr. Pickles is a HotHouse production created by Will Carsola and Dave Stewart. It is executive produced by Carsola, Stewart, Michael J. Rizzo, and Mike Mayfield.

Adult Swim (AdultSwim.com), launched in 2001, is a WarnerMedia network offering original and acquired animated and live-action series for young adults. Airing nightly from 8 p.m. to 6 a.m. (ET/PT), Adult Swim is the #1 network with persons 18-34 and 18-49 and is seen in 94 million U.S. homes.

WarnerMedia is a leading media and entertainment company that creates and distributes premium and popular content from a diverse array of talented storytellers and journalists to global audiences through its consumer brands including: HBO, Warner Bros., TNT, TBS, CNN, DC Entertainment, New Line, Cartoon Network, Adult Swim, Turner Classic Movies, truTV and others.