Are you searching for Queer as Folk TV series news? You’ve come to the right place!

Best 2022-23 TV Shows
Get all the latest information on the Queer as Folk new tv show here at newshowstv.com.

There are 100s of new 2022 TV shows and new 2023 series coming your way. Queer as Folk Season 1 will be with us eventually, but when? We gather all the news on the series premiere of Queer as Folk to bring you the most accurate Queer as Folk coming soon news and premiere date. 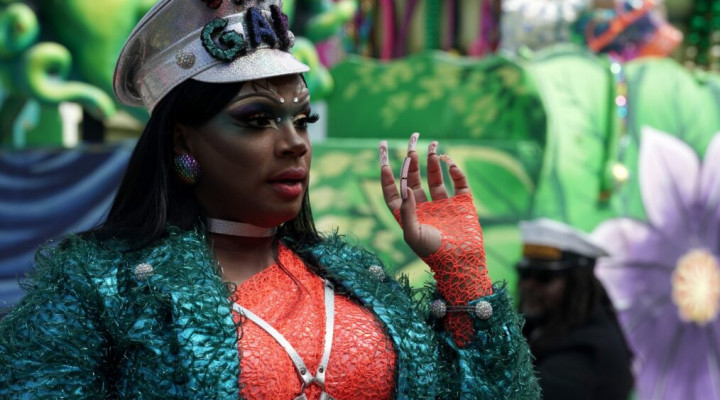 Queer as Folk is streaming June 9th on Peacock: https://pck.tv/3KGkxEX

Queer as Folk is a vibrant reimagining of the groundbreaking British series created by Russell T. Davies, exploring a diverse group of friends in New Orleans whose lives are transformed in the aftermath of a tragedy.

· Peacock today announced a straight to series order for QUEER AS FOLK, from UCP, a division of Universal Studio Group, and creator Stephen Dunn.

· QUEER AS FOLK is a vibrant reimagining of the groundbreaking British series created by Russell T. Davies, exploring a diverse group of friends in New Orleans whose lives are transformed in the aftermath of a tragedy.

· "QUEER AS FOLK was more than just a show, it was a ground-breaking and necessary voice for so many people. Stephen's new version for Peacock arrives at yet another pivotal moment in our culture," said Lisa Katz, President, Scripted Content, NBCUniversal Television and Streaming. "Alex Sepiol, EVP of drama programming, and his team have championed this project from the first moment it landed on their desks, working to ensure the script became the series we're announcing today. The entire team is so excited to be a part of introducing a new generation to this type of authentic and affirming storytelling."

· "It is a surreal honour to adapt the notoriously groundbreaking series by Russell T. Davies. When the show originally aired, the idea of unapologetic queer stories on TV was so provocative that I felt I could only watch QUEER AS FOLK in secret," said creator Stephen Dunn. "But so much has changed in the last 20 years and how wonderful would it be if the next generation didn't have to watch QUEER AS FOLK alone in their dank basements with the sound muted, but with their family and friends and the volume cranked all the way to the max..."

· "QUEER AS FOLK is a transformative show, that in its past iterations, was a pioneer in representation of the LGBTQ community and we're excited to continue that legacy. Stephen Dunn brings an energy and modern lens to the series through characters we've fallen in love with. We can't wait to bring it to Peacock for viewers to enjoy this visionary and vibrant show," said Beatrice Springborn, President of UCP.

· QUEER AS FOLK is produced by UCP, a division of Universal Studio Group. The series is created, written and executive produced by Stephen Dunn, who will also direct the pilot episode. Additional executive producers include Lee Eisenberg, Emily Brecht, original series creator Russell T. Davies, Nicola Shindler, and Richard Halliwell on behalf of NENT Studios UK, which distributes the format.

· ABOUT STEPHEN DUNN: Stephen Dunn is an award-winning writer/director based in Los Angeles, though currently quarantined in native Newfoundland, Canada. Most recently, Dunn co-wrote and directed the Spirit Award and GLAAD Award-nominated episode, "The Son", of the Apple TV+ series Little America. His debut feature, CLOSET MONSTER, had its world premiere at TIFF 2015; it won the Canada Goose Award for Best Canadian Feature. Indiewire said of the film: "Closet Monster" may feature a talking hamster and a hefty volume of very bloody flashbacks-turned-fantasy, but Oscar's issues continually remain real and relatable. Dunn plays around with perspective and style, but all the flash doesn't obscure the film's emotion and heart, which are deep and true." The film has been released by Strand. Currently, Dunn is writing and will direct the reimagining of the iconic series Queer as Folk for Peacock, as well as adapting the novel Yes, Daddy at Amazon with Patrick Moran producing. Dunn is repped by WME, Mosaic, and HJTH.