Are you searching for Sort of TV series news? You’ve come to the right place!

Get all the latest information on the Sort of new tv show here at newshowstv.com.

There are 100s of new 2021 TV shows and new 2022 series coming in 2021 and 2022. Sort of Season 1 will be with us eventually, but when? We gather all the news on the series premiere of Sort of to bring you the most accurate Sort of coming soon news and premiere date. 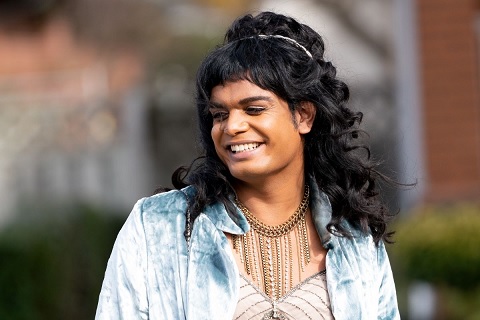 
Whether Sort of is ultimately cancelled or renewed for Season 2 will be revealed, but one thing is for sure, Sort of is on our new and 2021 upcoming TV shows list!

· HBO Max announced today a new eight-episode half-hour comedy series SORT OF, created by Bilal Baig ("Acha Bacha") and Fab Filippo ("Save Me"). Commissioned by HBO Max and the CBC, the series is produced by Sienna Films, a Sphere Media company with the participation of the Canada Media Fund.

· Logline: SORT OF follows the journey of "Sabi Mehboob" (Baig), a gender fluid millennial who straddles various identities from sexy bartender at an LGBTQ bookstore/bar, to the youngest child in a large Pakistani family, to the de facto parent of a downtown hipster family. Sabi feels like they're in transition in every aspect of their life, from gender to love to sexuality to family to career. A coming-of-age story, SORT OF exposes the labels we once poured ourselves into as no longer applicable...to anyone.

· Credits: SORT OF is created by Bilal Baig and Fab Filippo, who also serve as showrunners and executive producers. The series, produced with the participation of the Canada Media Fund, is written by Baig, Filippo, Jenn Engels, Nelu Handa and Ian Iqbal Rashid, with Filippo and Renuka Jeyapalan (Kim's Convenience, Workin' Moms) directing. Sienna Films' Jennifer Kawaja and Julia Sereny are also executive producers on the series. SORT OF is distributed worldwide by Sphere Media with Abacus Media Rights handling international sales.

· SORT OF will also launch in Canada this fall on the CBC Gem streaming service and CBC TV.

· About CBC/Radio-Canada: CBC/Radio-Canada is Canada's national public broadcaster. Through our mandate to inform, enlighten and entertain, we play a central role in strengthening Canadian culture. As Canada's trusted news source, we offer a uniquely Canadian perspective on news, current affairs and world affairs. Our distinctively homegrown entertainment programming draws audiences from across the country. Deeply rooted in communities, CBC/Radio-Canada offers diverse content in English, French and eight Indigenous languages. We also deliver content in Spanish, Arabic Chinese, Punjabi and Tagalog, as well as both official languages, through Radio Canada International (RCI). We are leading the transformation to meet the needs of Canadians in a digital world.

· About Sienna Films, a Sphere Media company: Sienna Films is one of Canada's preeminent scripted content companies, producing film and television internationally since 1992. Sienna's executive producer Jennifer Kawaja and co-executive producer Laura Perlmutter were on the ground to produce Sort Of. Over the past several years, Sienna has made its mark in television. Credits include four seasons of the award-winning series Cardinal (Bell Media/Hulu/BBC2/BBC4/Canal+) starring Billy Campbell and Karine Vanasse; three seasons of Ransom (Corus/CBS/eOne), and the CBC series Trickster, which premiered to critical acclaim at MIP and TIFF and then was broadcast on Sky UK and CW and Sundance in the US as part of an international release. Past productions include 13-part limited series Combat Hospital starring Elias Koteas and Michelle Borth and mini-series Diamonds starring Derek Jacobi, Judy Davis and James Purefoy; and several feature films including How She Move (Paramount), Touch of Pink (Sony Classics), New Waterford Girl (eOne) and Sweetness in the Belly (eOne, HanWay Films). In production is the first season of period drama The Porter for CBC and BET+ and recently completed, is the feature length documentary One of Ours, which won the 2021 Hot Docs Special Jury Prize and is being distributed internationally.

· About Abacus Media Rights: Abacus Media Rights (AMR) acquires and distributes a diverse slate of premium, multi-genre programming in the international market. At the same time, the company also works with producers to facilitate pre-sales and development finance as well as broadcaster commissions. Embracing a fully transparent reporting ethos throughout, AMR focuses on building strong client relationships and generating positive solutions at every stage of the process, from initial financing to worldwide broadcast in order to successfully deliver scripted and non-scripted entertainment that counts to a global audience. Abacus Media Rights is a member of the Amcomri Media Group.