Are you searching for Worst Cooks in America TV series news? You’ve come to the right place!

Get all the latest information on the Worst Cooks in America new tv show here at newshowstv.com. 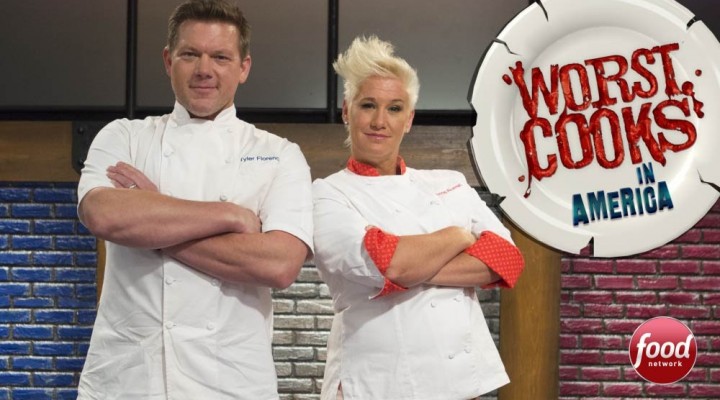 NEW YORK - June 27, 2019 - This summer, Bobby Flay rejoins Anne Burrell to whip a new roster of cooking disasters into culinary shape in the return of Worst Cooks in America. The hit series pits two teams of the country's most atrocious cooks, one led by Bobby and the other by Anne, against each other in a kitchen boot camp designed to transform their food skills. In the end, only the one recruit who makes the most impressive culinary transformation wins a $25,000 grand prize and bragging rights for their team leader. The new season helmed by Anne and Bobby, whose last stint as a Worst Cooks mentor was in 2014, premieres Sunday, August 4th at 9pm (all times ET/PT) with recruits including an ex pro-football player, a priest and a Zumba instructor.

"Bobby's reunion with Anne on Worst Cooks is hilariously entertaining and extremely competitive," said Courtney White, President, Food Network. "The recruits arrive with hopeless kitchen skills, but after Anne and Bobby get ahold of them the transformations are miraculous."

In the season premiere, fourteen terrible cooks enter boot camp with dreams of putting their kitchen nightmares behind them. Anne and Bobby see just what kind of disasters they're dealing with after asking the recruits to create a date night dish. The teams are picked and then the recruits are shown their team leader's signature date night dish and are tasked with replicating it exactly. Then, the recruits on each team with the worst dishes are sent home without a second date. Upcoming episodes include an ice cream battle to beat the summer heat, a plate-smashing game with Greek cuisine and a retro-themed fondue challenge. The season culminates in the finale on Sunday, September 22nd at 9pm with the final two most-improved recruits preparing a three-course restaurant-quality meal for guest judges Vivian Chan, Martina McBride and Donal Skehan in a blind taste test to determine the winner of $25,000 and bragging rights for their mentor.