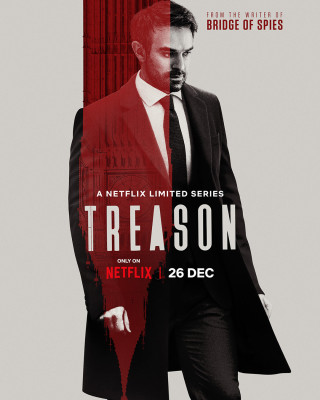 Treason, a five-part spy thriller series, will be coming on Netflix UK and Canada. The show centers on MI6 agent Adam Lawrence, who appears to have his life together but has a murky history. It premieres Monday, December 26.

Matt Charman (Bridge of Spies) serves as the creator of the series, and Louise Hooper (Flesh & Blood) is the director. Foz Allan (Rivera), Valery Ryan (Steel), and Tom Maguire are producing, with Michael Robbins serving as line producer.

“Trained and groomed by MI6, Adam Lawrence’s career seems set. But when the past catches up with him in the form of Kara, a Russian spy with whom he shares a complicated past, he is forced to question everything and everyone in his life. A triangular relationship forms between Kara, Adam and his wife, Maddy; three people who are trying to expose each other’s secrets, navigate political and diplomatic relationships, whilst hanging onto their personal lives, and those they love most.”